The Things Conference Closes After a Spectacular Few Days

This weekend saw the completion of The Things Conference in Amsterdam, a 3 day Internet of Things (IoT) extravaganza that saw the leading industry players in the world of LoRa and LoRaWAN come together supporting The Things Network, a global initiative of volunteers that has really jump started the IoT.

The Things Network was the brainchild of two entrepreneurs in an Amsterdam hackerspace –  Wienke Giezeman and Johan Stokking – who realised back in 2015 that a recently released IoT technology solution – LoRaWAN – held the key to a global, license free, community driven IoT platform, which could be built by it’s users without intervention from mobile operators or Governments.  Since its inception, the network has grown to over 30,000 users and handles over 4 million IoT data messages per day around the world – monitoring everything from canal flooding in Amsterdam, to radiation levels in Japan, to sync’ing railway stations clocks in Berlin by Deutsche Bahn.

We’ve heard a lot about the Internet of Things for a long long time now –  but unfortunately this has been a lot of hype, and not a lot of substance.  As we have previously mentioned, there are a variety of reasons for this, however we think LoRaWAN has now cemented itself as the “other alternative” to a carrier hosted solution, in no small part to The Things Network.  In the two and a half years since LoRaWANs initial release we have come a long way – other IoT technologies barely register on the chart.

Behind the army of 750 enthusiastic Things Conference attendees from over 40 countries worldwide, other conference delegates included a variety of experts from the LoRaWAN tech world along with volunteers who have successfully used TTN in the real world.  Delegates representing the Lora Alliance, Semtech, Deutsche Bahn (DB), Universities Antwerp,TU Delft and others, ARM, Microchip, Microsoft, Amazon, Multitech, Laird, muRata, ST, RAK, Farnell, Avnet and many more came along to make the event a success.  The Things Conference also demonstrated some excellent future use cases – with a transmission from NORSAT-2 orbiting 600km above the Earth, making satellite based gateways a possibility (Lacuna Space expects to begin trials of its beta service of ‘The Lacuna Network’ in late 2018).

As the Initiator of The Things Network Lancashire, Milliamp Technologies is looking forward to getting filled in on more of the details when some of the community members return from Amsterdam later this week (Milliamp was too busy to go unfortunately).  More details on exciting new features such as satellite operation, over the air firmware updates, geolocation and the new TTN v3 stack including private operator peering to come later in the week ! 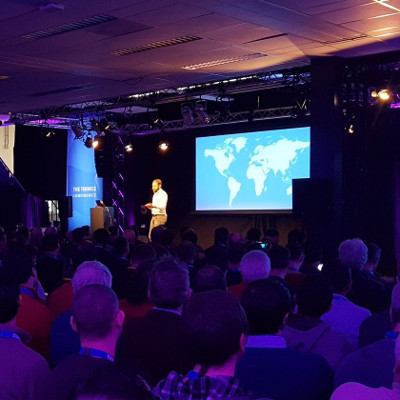